The Universal Declaration of Human Rights of the United Nations adopted in December 1948,

The first paragraph of the Preamble of the 1945 Indonesian Constitution,

Resolution 1514 (XV) of the United Nations General Assembly adopted on 14 December 1960, which guarantees the granting of independence to the peoples of colonial territories,

The Political Manifesto of the National Papuan Committee adopted on 19 October 1961,

President Sukarno’s recognition of the existence of the West Papuan State as manifested by his People’s Triple Command announced on 19 December 1961,

The letter of the United States Congress dated 22 May 1998,

The Statement of the West Papuan People’s Team of 100 on 26 February 1999 addressed to the President of the Republic of Indonesia and his cabinet, and

The results of the Second Papuan People’s Congress in June 2000, and in particular the strong aspirations of the entire people and nation of Papua to separate from the unitary Republic of Indonesia,

The Papuan people and nation hereby state, through the intermediary of the Second Papuan Congress of 2000:

– The Papuan Nation has been sovereign as a people and state since 1 December 1961,

– Through the intermediary of the Second Congress, the Papuan Nation reject the results of Pepera (the ‘Act of Free Choice’} because it was conducted to the accompaniment of threats, intimidation, sadistic killings, military violence and amoral deeds that gravely violated humanitarian principles.

The Papuan Nation therefore calls on the United Nations to revoke UN Resolution 2504 adopted on 19 November 1969.

Indonesia, the Netherlands, the United States of America and the United Nations must recognise the political rights and sovereignty of the West Papuan Nation which are lawful by virtue of historical fact, law and social and cultural heritage.

The crimes against humanity that have been perpetrated in West Papua as a result of the international political conspiracy in which Indonesia, the Netherlands, the United States of America and the United Nations were involved must be thoroughly investigated and the perpetrators tried before an international tribunal.

The United Nations, the United States of America and the Netherlands should review their involvement in the process by which Indonesia annexed West Papua and should honestly, justly and truthfully convey the findings to the Papuan people on 1 December 2000.

Political negotiations to resolve the above problems must be undertaken honestly, peacefully and democratically, based on the principles of justice and truth.

The Papuan people, through the Second Congress, give full powers to the Papuan Presidium Council:

To struggle for world recognition of the sovereignty of the Papuan people and for investigations into and the trial of the perpetrators of crimes against humanity in West Papua.

To speedily set up an Independent Team to enter into peaceful negotiations with Indonesia and the Netherlands under the auspices of the United Nations for a referendum on recognition of the sovereignty of the Papuan people and Nation.

To use available resources in Papua in a non-binding manner to fund endeavours to achieve the objectives of the struggle.

To give an account of the implementation of the above tasks on 1 December 2000.

Negotiations to settle the question of the political status of West Papua by just and democratic means must be undertaken between the lawful representatives of the Papuan Nation and Indonesia, the Netherlands, the United States and the United Nations.

Bearing in mind the experiences of the Papuan Nation during 38 years of oppression and violence under the government of the Republic of Indonesia, the Second People’s Congress held in 2000 calls upon the United Nations and the international community to provide protection to the Papuan Nation in matters of law and security.

The Second Papuan Congress 2000 calls upon the Papuan people to respect and guarantee the civil rights of all inhabitants living in Papua, including minorities. In addition, the Second Papuan People’s Congress calls upon the Papuan people to behave cordially and in a supportive manner towards investment activities in Papua, provided that the investors acknowledge the ancestral rights of the owners and behave respectfully towards the environment and culture of Papuan society.

This resolution was truthfully and earnestly drawn up at the Papuan Congress 2000 which was attended by 501 lawfully chosen representatives of West Papuan society from all corners of the Papuan land and from abroad, and which was also attended by 21,000 Papuans and non- Papuans. This Congress is the highest democratic vehicle of the Papuan people and, as such, it is the only authority entitled to adopt lawful political decisions of the Papuan Nation.

The Papua Congress 2000 once again affirms to the nations of the world that, based on the correction of history, the Papuan Nation has been free since 1 December 1961.

This resolution shall be officially presented with respects to the Government of the Republic of Indonesia, the Dutch Government, the US Government and the United Nations, as well as to the Nations and the international community.

The Leadership of the Second Papuan Congress Plenary: 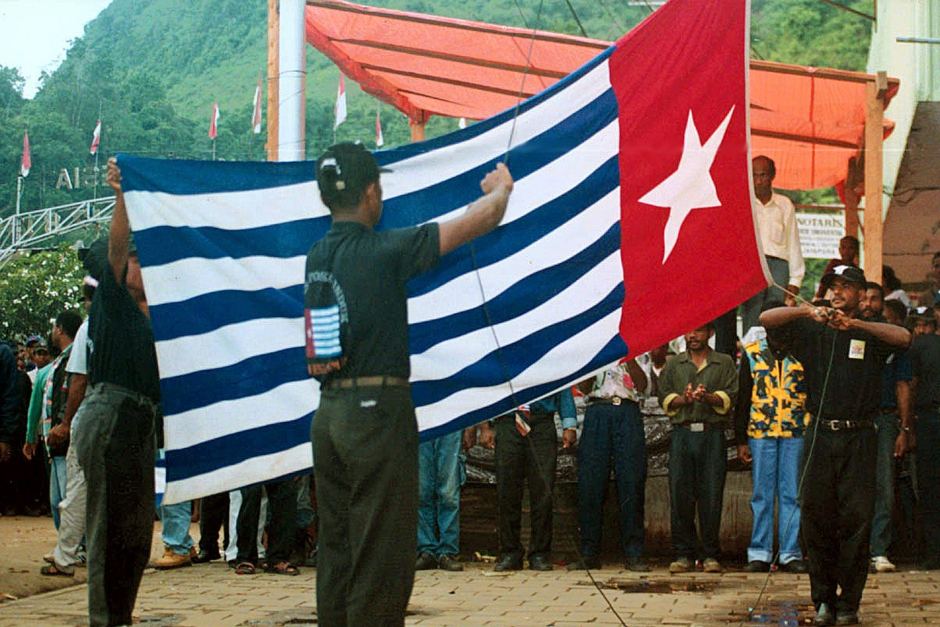 The national flag of West Papua is raised at the Second Papuan Peoples Congress, June 2000