Buchtar Tabuni, one of dozens of political prisoners arrested during the 2019 West Papua Uprising, is facing 17 years in prison for so-called makar, or treason. The international media and solidarity groups must put urgent pressure on the Indonesian government before his sentencing.

Nothing could illustrate the emptiness of Indonesian claims to democracy and justice more than this outrageous trial. Only Buchtar faces such a heavy sentence. The severity of the prosecution is due to his role as a respected leader of the West Papuan liberation movement, and nothing more: this is sheer state-sponsored persecution. The Indonesian government and the prosecution must immediately drop all charges against Buchtar and all West Papuan political prisoners.

I too suffered in Indonesia’s kangaroo courts in the early 2000s, and know first hand that the prosecution, police and judges will do anything to silence political critics. There are no fair trials for the Black Melanesians of West Papua under Indonesian colonial rule. We need all international solidarity groups to assist as they did with my case. Please pressure your governments to intervene and secure Buchtar’s release.

Last year, in response to racist abuse hurled at West Papuan students in Surabaya by Indonesian military officers and militia groups, the people of West Papua poured into the streets, non-violently demanding an end to racism and discrimination. Their actions are echoed in what is happening in the United States right now. For doing so, West Papuan demonstrators were shot, arrested and imprisoned. The racist perpetrators, who barricaded West Papuans in their dormitories, called them ‘monkeys’ and threatened to ‘slaughter Papua’, have been left to roam free. One single Indonesian received just five months in prison for this brutal racism, and has already been released.

Buchtar was arrested in his home during the Uprising, even though he had did not organise the spontaneous demonstrations against racism. The only reason he was arrested is because he is the Deputy Chair of the Legislative Council of the United Liberation Movement for West Papua (ULMWP), and Chair of the National Parliament of West Papua, a peaceful pro-independence grouping.

The ULMWP is a member of the Melanesian Spearhead Group, a regional body, along with Indonesia. What country on Earth arrests and imprisons the very people it sits around the table with at international fora? Only Indonesia could break such basic principles of international diplomacy and human rights. This is the reality of how Black Melanesian lives are treated by Indonesia. The Indonesian government must immediately drop all charges and release Buchtar and all other political prisoners arrested for alleged involvement in anti-racism protests. 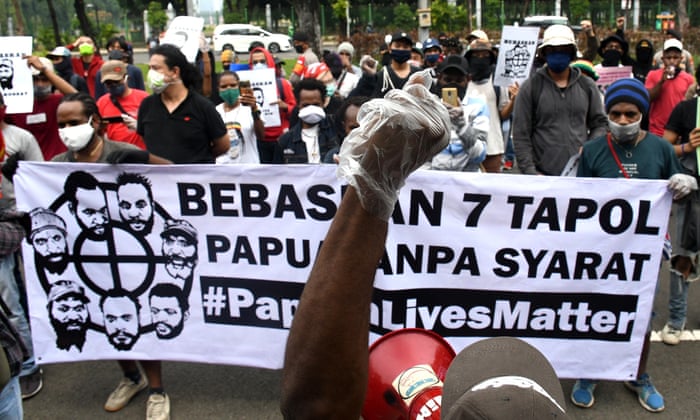 Next Post Benny Wenda: Victory for political prisoners – but we must be vigilant