As Chairman of the United Liberation Movement for West Papua (ULMWP). I condemn in the strongest terms the request, made by the Indonesian state prosecution, to execute West Papuan freedom fighter, Yogor Telenggen.

Yogor was sentenced to life imprisonment in 2013. In 2018, he escaped from Abepura Prison, the same prison I escaped from in 2002. Imprisoning freedom fighters, self-determination advocates and human rights defenders is a standard tactic of the Indonesian regime.

Yogor’s was re-arrested and shot on May 12, 2018 and the Indonesian prosecution is now seeking his execution for an alleged shooting incident. This request is an outrageous attempt to silence our struggle for freedom through the clinical and extreme violence of the colonial state. 500,000 West Papuans have died in the occupation of our land, but Indonesia never proposes any significant accountability – certainly not the death penalty – for the Indonesian officials and generals responsible. 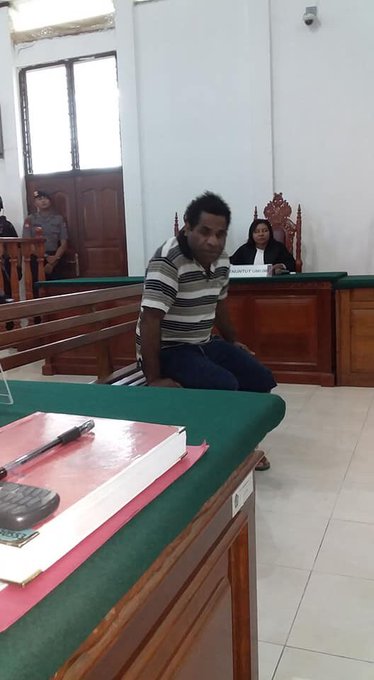 Often, the Indonesian state does not even bother with the court system, carrying out extra-judicial assassinations of West Papuan leaders and activists. Just this month, news came through that two West Papuan people were tortured and killed by Indonesian security officers after trying to escape from Abepura Prison.

The Indonesian military and the West Papua Liberation Army (TPN) are belligerents in an armed conflict. One side, the Indonesian state, seeks the genocidal elimination of the Indigenous population of West Papua. The other, the TPN, seeks to defend our Indigenous practices, identity, and existence. Many liberation movements, including Indonesia’s own struggle against the Dutch in the 1940s, have used defensive methods to protect themselves against colonial repression and injustice. It is entirely inappropriate for death penalty proceedings to be brought against combatants in this conflict.

Fifty-five years ago, Nobel Peace Laureate Nelson Mandela was accused of violence and faced the death penalty for defending his people against oppression. After widespread campaigning, his life was spared, and he became a moral leader around the world.

Yogor has struggled to end the violence being committed against his people and along with many others, sought to protect West Papuans against the land-grabbing, human rights abuses and environmental destruction of the occupation.

The ULMWP calls on the Indonesian prosecution to immediately stop its attempts to end Yogor’s life. We call on all human rights groups, foreign governments and supporters around the world to pressure the Indonesian state to guarantee that the death penalty will not be sought against Yogor.

This conflict will not be ended through executions, torture and bombings. It will be ended through a peaceful solution which genuinely respects the fundamental rights of the West Papuan people to self-determination.