Over this past month there has been a severe escalation in violence across West Papua with many Papuans believed to have been killed or injured. As the Indonesian military and police continue their joint operations in Puncak Jaya, it is reported that land and air attacks have killed at least 7 West Papuan people including children and a pregnant woman.

ULMWP has received first-hand reports about people in the area being deeply traumatised by the military operations. People are reporting they are too scared to travel outside, and they have stopped tending their gardens and visiting nearby relatives and neighbours. There are reports of houses being burned down, hit and run attacks, and many becoming displaced as refugees fleeing the conflict. Civilians are traumatised and terrified saying that they are being hunted by the Indonesian Security Forces.

Without the presence of journalists and resources to rely on Indonesia has essentially closed off the remote area making it nearly impossible to know exactly what is happening, and to verify information we are receiving from eye witnesses.

The Indonesian government is blaming the violence on the Papuan people themselves. They are justifying their state terror against freedom fighters in what they describe as “armed civilian criminal separatist groups.”  These groups are being used as a justification by the Indonesian government to deploy additional “Anti-Terror” Special Forces troops from Detachment 88, a unit widely regarded as the most notorious death squad in West Papua.

The area is becoming a “hunting ground” and a “war zone” under Indonesian military occupation.

At this time it is unknown the exact number of Papuans that have been killed in these recent attacks. It is well documented and historically known that over 500,000 West Papuan people have died, with countless others raped, beaten, tortured, disappeared, and jailed as prisoners of conscience in this Neglected Genocide since Indonesia illegally occupied West Papua in the 1960s.

Along with the brutal killing of West Papuan civilians in Puncak Jaya, there are also reports of people being killed across West Papua in what the Indonesian government describes as “tribal fighting”.
On behalf of ULMWP I would like to state very clearly that this increase in violence is the systematic manipulation of the Indonesian government. They are executing a deliberate strategy to stir up ethnic conflict in West Papua as a means of justifying greater military presence in the territory to sanction their state violence and ongoing genocide of the West Papuan people.

In our entire history, West Papuans have never fought each other in a so-called “tribal war” like what is happening now. The Indonesian government claiming they have to intervene regarding internal conflict amongst tribes is false. Again, they use this to justify increased attacks, and Indonesian military presence in the territory. Indonesia has shown time and again they have no concern for the ever increasing numbers of Papuans that have died under their oppressive and violent rule. To them, West Papuan lives are simply expendable. When presented with facts and evidence the government’s response is to deny, shift blame, and when necessary outright lie to the international community while pretending that all is well in West Papua.

It is also of no coincidence that the Indonesian government is stirring up such conflict just weeks after support for West Papua at the United Nations was given by several Pacific countries. The Indonesian government’s speech and rights of reply espoused threats and baseless arguments about claims of “territorial integrity over West Papua. What about West Papua’s territorial integrity? The ‘Act of Free Choice’ is what Indonesia upholds as their sovereignty claim over West Papua. Any serious and fair assessment of the execution of the ‘Act of Free Choice’ in 1969 proves that its implementation was not legitimate. West Papuans want to be free, we have a legal right under international law to be free, and no amount of Indonesia’s threats and fake authority will change that.

The Indonesian government has lost the legal, moral, diplomatic and political argument over West Papua, and they are now resorting to even greater levels of violence as a result.

Therefore, I would like to once again alert the world to the deteriorating situation in West Papua. For over 50 years, the Indonesian government has sought to systematically destabilise West Papua in order to justify further military intervention. The situation is unacceptable and remains critical.

As Chairman of ULMWP I appeal to all friends of West Papua around the world to continue their show of solidarity with us, and our cause to live in safety and as free people. I urge political leaders, organisations, and humanitarians everywhere to reach into their sense of humanity and please continue to keep an eye on the increasing violence in West Papua.

West Papuans will not be provoked, nor will we be terrorised into submission by Indonesia’s ongoing brutality and ethnic cleansing of Melanesians in West Papua. With the spirit of the West Papuan people, ULMWP will continue to carry on until our fundamental right to self-determination and independence is finally achieved. 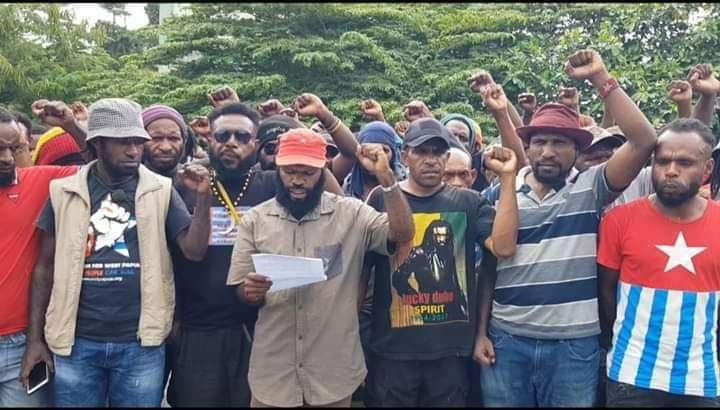 Next Post Message of congratulations from ULMWP Chairman to KNPB Congress